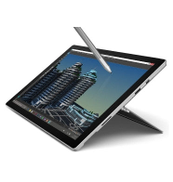 2736 x 1824 pixels resolution and 267ppi of pixel density. It’s thinner and lighter as well with 8.45mm thickness and 766g weight (Core m3 version). The pen that comes with the tablet now offers better writing experience and offers 1,024 pressure sensitivity. Moreover, both the Pen and new keyboard is compatible with the Surface Pro 3 as well. There is also the Asus Transformer T100TA you can check out.

Under the hood, the tablet packs 6th generation Core m3/i5/i7 processor paired with 4/8/16GB of RAM. Even after packing these new specs, you get the same battery life and is capable of showing video playback for up to 9 hours. The new keyboard now offers better and laptop like keys and glass trackpad which is really easy and smooth to use. Other notable features in this tablet are: 128/256/512GB SSD storage options, Wi-Fi, Bluetooth, a full size USB 3.0 port, microSD card reader, 8-megapixel rear camera and 5-megapixel front camera. For those who are looking for a convertible laptop without waiting for the Microsoft Surface Pro 4 release date South Africa, there is the Microsoft Surface Book and Lenovo Yoga Pro 3.

Things we loved about the latest Surface tablet:

Most of the tablet makers are trying to release a tablet-laptop hybrid in 2015 with a huge screen. To follow the likes of Samsung and Apple in this race, Microsoft is all set to go big with their upcoming Microsoft Surface Pro 4 tablet. The successor of the Surface Pro 3 is expected to feature a big 12-inch display. There are also rumors about Microsoft planning to release the upcoming tablet in three different versions. Continue reading to learn more about the Microsoft Surface Pro 4 South Africa price, release date and specs.

As mentioned earlier, the upcoming Surface Pro 4 tablet will be featuring a 12-inch display. There are also rumors suggesting that there will be a 10-inch and 14-inch

version available as well. However, the 14-inch version will feature the same resolution and the 10-inch version will be coming with weak specs. The 12-inch version is expected to show 2160 x 1440 pixels just like its predecessor. However, the previous one showed only 216 ppi which we are hoping to see improved on the upcoming one. If you are looking for a tablet with giant screen, you can think about checking the Microsoft Surface Pro 4 South Africa price.

The upcoming Microsoft Surface Pro 4 is expected to sport Intel Core M processors inside. The Mini version will be featuring the same processor inside as well. The processor is good battery life-wise but it does not perform well compared to the i3 series we used in the predecessor. All the Surface Pro 4 version is expected to include a wide range of external ports including USB 2.0 and 3.0 ports. As these tablets are not available yet and most of these info are just rumors, we have to wait to find out how these processors actually work in real life. If you want a tablet that can also work as a laptop, you can think about waiting for the Surface Pro 4 release date South Africa.

laptop tablet hybrid, we are expecting something similar in the upcoming Surface Pro 4. The tablet will be running Windows 10 which is only available now as an early access preview. It will be interesting to see how the latest OS works in the tablet once the Surface Pro 4 release date South Africa becomes available. There are rumors that the Surface Pro 4 will be sporting more than 8GB of RAM.

Things we loved about the upcoming Surface tablet:

Things we didn’t love about the Microsoft Surface Pro 4: 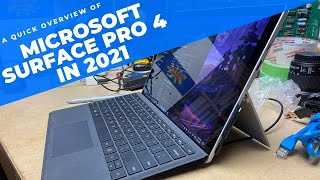 Looking at the Microsoft Surface Pro 4 in 2021

Cheapest price for Microsoft Surface Pro 4 in South Africa is R 15995 sold at Zeek Online.
No major price change compared to two weeks ago.
**Amazon pricing is not included in price tracking/graph